In the Flashback series our writer Dag Sødtholt is shedding light on interesting and perhaps a bit overlooked films. The presentations will vary in scope. Since they are meant to inspire the reader to seek out the films, the articles and the accompanying images will avoid spoilers.

Lars Klevberg has every reason to be proud of his highly promising debut feature Polaroid. Even though it does not succeed as a whole as a horror film, it is seldom to see a work in this genre with such a refined aesthetic approach, well-thought-out mise-en-scène, and sophisticated, subdued atmosphere.

Polaroid is clearly a labour of love that goes way beyond the call of duty for a “high school horror flick”. Together with another Norwegian, cinematographer Pål Ulvik Rokseth, who also shot the visually refined Late Summer (Henrik Martin Dalsbakken, 2016) – written about here by this author, in Norwegian but the extensive use of screenshots ought to give you a flavour – Polaroid has extensive use of interesting light sources in remarkably dim, but highly evocative images, marked by a painterly and subdued approach to colour in the production design. These outstanding features of the film will be richly documented in screenshots making up the bulk of this article.

In a film about photography, centred on an old cursed Polaroid camera that calls forth a ghost when used, it is highly appropriate that the cinematography is exquisite. The dimness of the imagery is also justified since the ghost can only operate in darkness. The use of the colour red, often signalling danger, is a common device in cinema – think of M. Night Shyamalan‘s The Sixth Sense (1999); that too employs it in connection with ghosts – but it is even more well-founded in Polaroid, since the lighting of a darkroom is red. So we see that these three signature properties of Lars Klevberg‘s film are not merely conceits but arise organically from the specific nature of the material.

This darkroom will play an important role in Polaroid.

Before this article goes on to celebrate the qualities of Polaroid just some words about its failings. The first 35 minutes of the 83-minute runtime (end titles excluded) are excellent. Then it leaves behind its emphasis on atmospheric horror set pieces for a more mystery-oriented plot as its high school characters investigate the background of the enigmatic Polaroid camera. Thus it falls into the same trap as another recent Norwegian-directed English-language horror movie, The Autopsy of Jane Doe (André Øvredal, 2016), which substituted what worked wonderfully – an hypnotic atmosphere of dread and character exploration – with a third act that concentrated on the much less involving activity of explaining what was behind the supernatural events.

In the case of Polaroid, this means that the horror scenes of the second half get kind of shoehorned into the investigative activities, and becomes shorter, with less build-up of dread and less distinctive mise-en-scène. Elements that worked well before, for example the flickering lights and particularly the brilliant touch of the ghost’s icily electrifying, asthmatic breathing, tend to become repetitive, worn-out in a process of diminishing returns.

The excellent Kathryn Prescott, in the top shot in her first appearance, appropriately about to be photographed and captured in a frame-within-frame composition typical for Polaroid.

The heroine, a high school student named Bird, is played by Kathryn Prescott, who is engagingly likeable as well as convincingly vulnerable and troubled. The other young actors, however, seem to be cast on their good looks more than presence and personality. In the first half they are involved in single-character horror situations governed by staging and visuals, but later, the more they are required to interact with each other the more their shortcomings are affecting the experience of the film. In this writer’s opinion Polaroid starts to falter in a scene in the school cafeteria that is a break in style and tone: the sudden daylight setting of the horror, and an overt hysteria and drama that is carried off in a much less convincing and refined fashion than earlier. It must also be said that the nesting-up of backstory plot threads, and the new characters drawn into the plot because of that, are not very involving in itself, with particularly a couple of recapitulating flashbacks coming across as hurried and mechanical.

Although most of the examples in the rest of the article are from the first part that does not mean that all the qualities of Polaroid suddenly vanish – but they are diluted by having to co-exist with the less satisfying aspects. (Due to problems to do with its production company this film, which was completed in 2017, never received a theatrical release but is now available on a German Blu-ray, which can be ordered here.)

This slide show of images demonstrating the film’s pervasive frames-within-frames device also serves as a good introduction to its atmosphere.
The magnificently cluttered, “magical” antique shop where Bird is working.
A highly evocative and atmospheric establishing shot of a house that will lead to important plot developments.
This is brilliant: during an early scene where we realise that Bird’s mother is distant and not always supportive, as she leaves there is a sudden change in visual strategy. The abrupt introduction of a silhouette motif strikingly conveys to which extent Bird feels forlorn, lonely and insignificant.
The motif returns as Bird realises there is something strange with a Polaroid she has taken. Not only is the shot ethereally beautiful but it is meaningful: she has discovered a shadow behind the girl, i.e. a silhouette – a being lurking in the shadows like Bird is withdrawing from the rest of society, and over the course of the film these two silhouettes will be pitted against each other.
In one of the film’s best horror set pieces, where Bird’s co-worker in the antique shop is going through a series of slides, we see something similar: him as silhouette and a shadow in the room.
In addition to the mercilessly onward-marching clicking sound of the slide projector – an echo of the eerie sound when the Polaroid camera takes a picture – the dimness of the room combined with the projector’s piercing light give the scene a haunting distinctiveness, with many otherworldly lighting effects…
…which turn positively surreal as documented by this slide show. (A fitting presentation device for a slide show scene!)
In another excellent horror scene (which includes a delightful jump scare), a costume party is over and its hostess, here positioned in the leftmost part of the shot, is indistinguishable from the two skeleton “mannequins” placed against the windows.
Under attack by the ghost, the hostess collides with a heavy ceiling lamp, and the scene concludes with the swinging lamp flickering on and on. This recalls a famous scene in Psycho, but stands on its own legs in Polaroid in several ways: through structure – the scene starts with her noticing that this specific lamp has gone out, and through the ghost’s abilities – it can make lights go out, in order to dim the surroundings so it can act. So it seems fitting that this specific lamp became the heroine’s downfall, incapacitating her, making her easy prey for the ghost.
The opening shot, which is both visually stimulating due to the odd constellation of figures, and narratively intelligent since the Polaroid camera is inside the box, “looking” up at new victims and seeing its first light after possibly having been dormant for years.
The brief flash of the camera reveals a shadow in the doorway, an opening that is eerily included in the next shot as the girls wait for the photo to develop, the form and darkness of its frame echoing the doorway.
Still in the prologue, which like so many Polaroid scenes is dimly and exquisitely lit: here there is a subtle light from beneath making the pattern in her crotch stand eerily out – like a skeleton?
Climbing the ladder, she is framed nicely while the angle and illumination highlight her terror.
A very nice idea: as she enters the attic, we first see clawlike hands as if it is a monster about to appear, before we see her human face. But then, soon after and very fittingly after this initial gambit, when she places a hand somewhere else a real monster hand embraces it.
A nifty idea: all pupils are being photographed and initially we think we are looking at a strip of stills, but then Bird gets up and leaves, having either sat motionless or the image started as a still. This is not just a gimmick, however: it illustrates her nature as an outsider and inability to fit in with others.
This scene comes after the film has began to falter but its aesthetics and cinematic language cannot be faulted. It is rife with overhead shots, and who can blame the filmmaker with these labyrinthine, Rorschach-like patterns on the ground to work with.
While Bird is on a perilous mission, we return time and again to her friend waiting in the car, shot in unbalanced, unnerving and “unhealthy” compositions.
Car window reflections are ubiquitous in cinema but used to nice effect, and the scene’s concluding shot with the perverse shadow of the tree is an inspired touch.

Let us look at the colour scheme, where yellow and, above all, red is important.

We end this survey of Polaroid with a series of bridges: First Bird biking home in an early scene, then a tragic situation as she mourns her co-worker, and a later scene concluding the pattern: 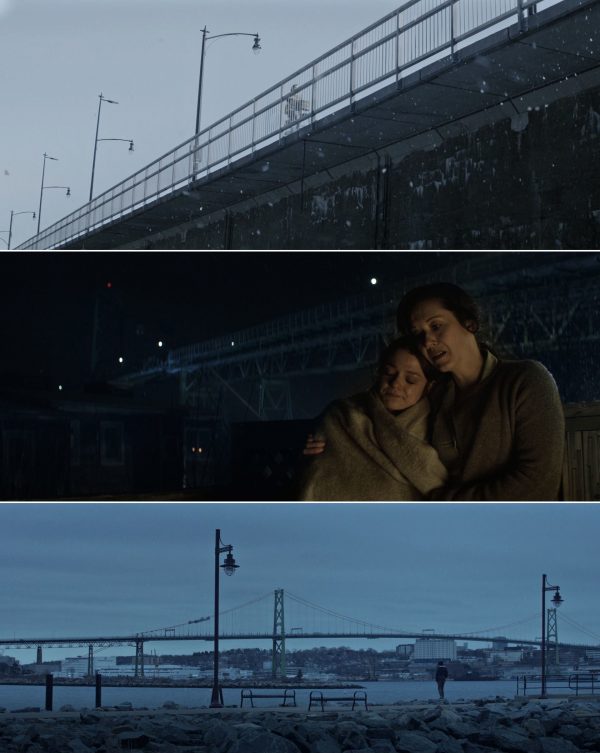 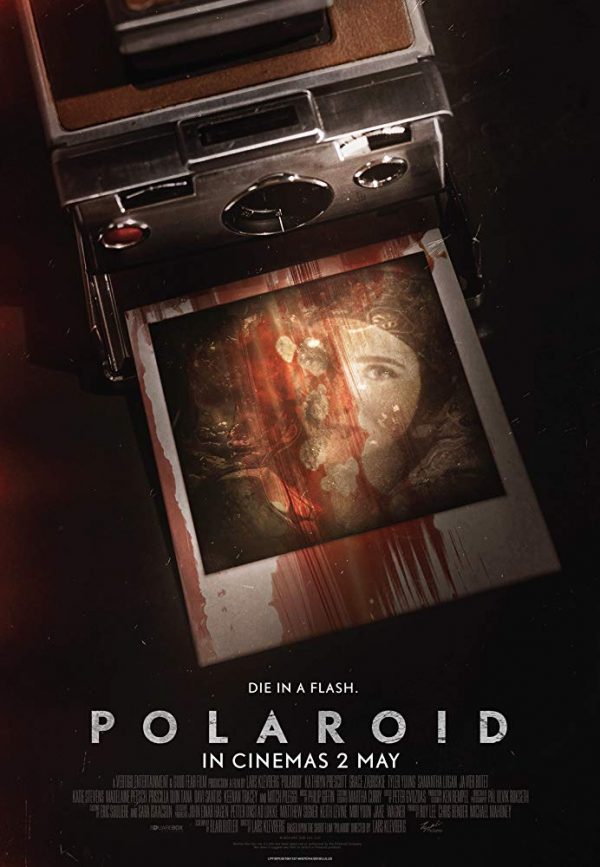 Read next: Éric Rohmer and the New Town in L’ami de mon amie (1987) Next article